Blue is now 8 years old – time flies!. Lovely friendly outgoing boy, keen to work and loves training. He was very successful being shown as a youngster – 5 x baby in group, 2 x baby in show, 3 x minor in group, 1 x minor in show before 7 months old. 5 x puppy in group, but we did not manage a puppy in show 🙁 Hardly shown in junior – just 2 x junior in group and now just gone in to intermediate class. First show in Intermediate and he got his points up for his Championship title beating grand and supreme champions. He has hardly been shown since then.

He has been hip and elbow scored – the perfect 0:0 – just like his mum, brother and sister 🙂

Eye checked by an opthalomologist in Dec 21 (aged 8) – all normal.

He has been fully DNA tested and profiled and  is clear for both forms of CA, CEA and MDR1. He is a carrier of DM and ILM.

Blue has now produced some top winning progeny in Australia and New Zealand – Ch Callicoma The Bees Knees winning  2 Best in Groups from Puppy class, four best in shows and well on her way now to her Supreme Champion, and NZ Champion Callicoma Black Java as well as Ch Callicoma Mudstone and Ch Callicoma Karoo Basalt, both from the rocks litter. He has also sired two litters for Kinjarra kelpies and is father of the lovely show winning Ch Kinjarra Georgie As Doll, as well as a litter for Qdos kelpies and for Tyrilebee Kelpies. The three Tyrilebee puppies being shown are all Australian Champions and one is a Grand Champion.

As well as two litters for Kinjarra, one for Qdos and one for Tyrilebee. 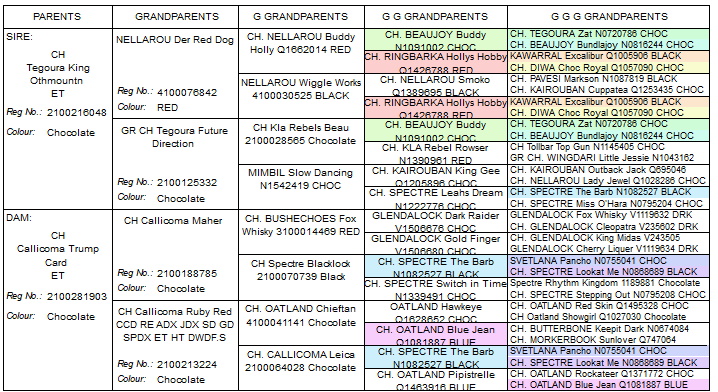